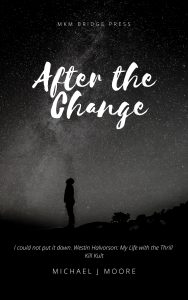 “About After the Change:

Diego Conner was at school when his world changed. As soon as his classmates started killing each other, he ran. Then, when he got home, his parents tried to eat him. They weren’t zombies though. They were alive and could be killed like any other living thing. He chose to simply call them “the changed”.
The only people he knew who didn’t turn were his friends, Sheena and Wes. With their families gone, the fifteen year olds are forced to look out for each another, constantly moving and hiding in the shadows. Eventually, though, they decided to search for survivors and colonize a local prison. Along the way, they quickly learn that the brainless, flesh-eating monsters that roam the streets are the least of their worries after the change.

Author Bio:
Michael J Moore lives in Seattle with his partner in life, and in literacy. His spare time is spent searching the darkest corners of his mind for whatever horrors, oddities or fascinations have found their way in, begging expression in his unique literary voice. He writes because the stories haunt him if he doesn’t. His previous publishing history includes a recent best-selling post apocalyptic novel, “After the Change” (published by MKM Bridge Press) that was introduced into the curriculum at the University of Washington. I’ve also authored “Bronte’s Ride” (also published by MKM Bridge Press), and the young adult series, “Ninja Girl” (which is being published this year by Rainier Publishing House – Book One has been adapted into a play and is set to be performed in Seattle this summer by Earthseed Seattle).