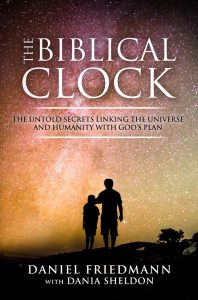 “About The Biblical Clock: The Untold Secrets Linking the Universe and Humanity with God’s Plan:

Science and religion have two seemingly opposing views of the universe’s biggest questions. But what if the real story told you they were both right?

Vancouver, 2009. Physics engineer and CEO Daniel Friedmann loves solving problems. When the avid scientist dives deep into scripture, he’s faced with questions he feels compelled to answer: Is it possible to harmonize the scientific timeline for the development of the universe with the biblical timeline described in Genesis 1? How do the evolution of human history and prophecies surrounding the End of Days fit in?
His quest for answers takes him and his nephew Seb on an incredible journey through the ages, discovering the lives and works of mystics, prophets, sages, philosophers, scientists and biblical commentators.
Follow Dan and Seb as they discover answers to some of the biggest questions in science and religion, including:
-Does the six-day creation account actually link with science’s 13.8 billion-year timeline?
– How do world history, Genesis, and the End of Days fit within the context of God’s Plan in heaven?
– How can the appearance of life on Earth, as depicted by the fossil record, match the sequence and timing of life on Earth described in Genesis 1?
– Do Genesis and the evolution of human history reveal the events and timing for the End of Days?
– Are there texts predating modern science that describe the Big Bang and contain the scientifically calculated age of the universe?
– And finally, is there a secret harmony resolving the creation-versus-evolution debate?
The Biblical Clock is a fascinating and entertaining read, digging deep into the universe and solving its well-kept mysteries. Order your copy today.