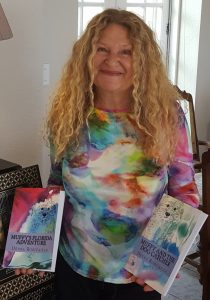 Tell us about yourself and how many books you have written.
I was born in England and grew up in a musical household, my father was a composer and conductor and my mother was a writer for TV. I worked as a professional musician and singer in the London session scene and traveled all over the world, moving to LA I ended up writing for musical theater. Now I live with my family on the bay in beautiful Sarasota Florida. I retired for a while but found it too boring so I started writing books. I have five finished and I'm about half way through the sixth. Some of them are for little kids about a dog called Muffy; and one is a sci-fi adventure for teens,("The Dream Stealers") and the one I just released is a Christmas tale for teens.

What is the name of your latest book and what inspired it?
The latest book is called "The Efficiency Claus: An Improbable Christmas Tale" and it's a rollicking romp about Santa's North Pole and the battle to keep the magic in Christmas. It was inspired by the over-use of technology. Now, don't get me wrong, I love technology and use it all the time, and unlike some people of my generation, I'm good at it too… But you can only go so far in the digital world without a sprinkling of magic and creativity. So I woke up one morning with the story bursting through my brain about an improbable alternate reality where Christmas is automated and Santa is put out to pasture in the name of efficiency…and all sorts of trouble ensues…

Do you have any unusual writing habits?
Well, I like to drink a lot of tea, so I have to have a bottomless cup next to me. And my little Maltese dog sits next to me, his name is Bentley but we call him Scruff McGruff on account of he likes to roll around in the garden and get twigs and grass stuck in his hair.

What authors, or books have influenced you?
Isabel Allende, Michael Scott, Michael Crichton, Herbie Brennan, (Faerie Wars Chronicles as well as Shadow Project); of course we must mention the classics;
Jane Austin and the Bronte sisters, as well as Isaac Asimov, George Orwell and Ray Bradbury.; Lewis Carroll and CS Lewis are special favorites too.

What are you working on now?
I just finished another Muffy book, Muffy and the Medicine Cat and I am in the process of doing the paintings for it. I have the outline for the next in the Muffy Series, which will be number four, a working title is "Muffy and the Crying Tree;" and I have an idea started for a book about an ancient priestess (I won't let the cat out of the bag for the plot just yet). "The Dream Stealers" is coming out on February 19th 2017 (the sci-fi adventure I mentioned) and so it goes……….

What is your best method or website when it comes to promoting your books?
Social media of course – it's important to have lots of interesting content, not just self-promotion. Of course the Book Place websites, the Kboards community, Good Reads 🙂 recently we found a great site called Ask David…..

Do you have any advice for new authors?
The best thing I think I can say to a new writer is a writer writes. Birds fly, fish swim, writers write. Just sit there and let is all go "splot" then you can go back and tweak and prune and punctuate…

What is the best advice you have ever heard?
"Don't worry, be happy"

What are you reading now?
Right now I am doing a lot of proof reading to get my own books ready to go up for sale on amazon. It's daunting work, it takes a lot of confront for me to fire up the computer and start plowing through looking for spelling mistakes and missing commas, but it has to be done (so my daughter keeps telling me). So I haven't had time to read for pleasure, but the last really good book I read was a John Grisham called "The Broker." It was set in Italy and there was lots of cappuccino and little cafes and reading it was like a mini-vacation.

What’s next for you as a writer?
I am just starting a new adventure set in the England of five thousand years ago, about a young Druid priestess. And I have two more series planned for little kids too, one about a police horse called "Latigo on Patrol" and another about a manatee called Melodee who appeared in Muffy's Florida Adventure. I'm also collaborating with my daughter on a book for little kids about a church mouse called Souris. It's very cute.

What is your favorite book of all time?
Hardest question you could ever ask. I love to read, I have always loved books. Growing up in England I had a wide window seat in my bedroom and I would crawl up there and close the curtains around me and create my own world and just read. These were some of my happiest times. I have so many favorites I couldn't possibly narrow it to one book!! Having said that though, I'll try.
OK, I'll give you two: "Jane Eyre" and "Wuthering Heights"….