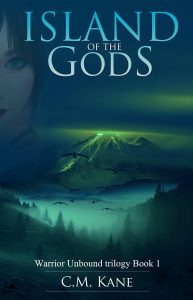 About Island Of The Gods:

Imagine a world of our future. A planet where all the gods of antiquity have returned. Tae Rames doesn’t like the Gods that much, they really aren’t that relevant to her life, but her life is about to take a dramatic turn for the worse. Feeling bored at school one day she looks into the death of Loki, and starts poking in places she knows she shouldn’t. Unfortunately she discovers a massive secret, a secret that someone has gone to a great deal of trouble to hide. Loki may not be dead, he may simply be trapped! Despite making a desperate attempt to cover her tracks, her intrusion is tracked – worse – it’s tracked back to her twin brother. Tae realizes what has happened and who is to blame when both her brother and her mother go missing. She also realizes that there is only one person with the power to rectify her mistake that she can trust, and it is this knowledge that sets her on her own, even more dangerous path. To find her family she must find and release Loki from his prison. Unfortunately Loki is in the one place that no-one wants to go -The Island, a place where all of earths criminals are sent to die. With the help of a long retired warrior and a couple of friends, Tae must find a way to prepare herself to survive to complete her goal, including discovering a long held secret of her and her brothers true parentage. But unknown to Tae, the dangers of the island will not be the only thing she faces, as an evil with plans of his own starts to stalk her every move. Even Zeus himself has decided to see what’s happening on his least favorite planet, causing problems of his own when he is followed by a plethora of other gods who are all curious as to what their leader is up to. Can Tae be ready in time to face her coming trials? Or will she fall before she reaches her objective – to save her family.

Author Bio:
For as long as I remember I have loved to read. I have also been totally in love with Sci/Fi. Every Friday night was spent watching Kirk,Spock and the gang get into trouble. I still love old movies like The Forbidden Planet, I am totally stunned that it hasn’t been remade into another movie–Joss Whedon, where are you? My writing only started recently, my main hope is that people take my stories for what they are. My little attempt to entertain them for a small portion of their life. It’s something that really is incredibly special. People I don’t know are entrusting a small part of their life to me. My deepest wish is that they come away from one of my books thinking — Well, that really wasn’t to bad, not to bad at all.