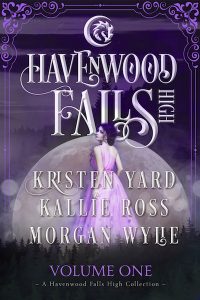 Welcome to Havenwood Falls, a small town in the majestic mountains of Colorado, where nobody is what you think, where truths pose as lies, and where myths blend with reality. A place where everyone has a story, including the high schoolers. These are only but three.

The first three novellas in the young adult paranormal fantasy series Havenwood Falls High, Home of the Dragons – and vampires, wolves, fae, and much more.

Written in the Stars by Kallie Ross
The Kasun wolf pack has always been led by a female alpha, and now that Willa Kasun’s about to come of age, she’ll be taking that role. Except Willa hasn’t shifted yet. She has until her next birthday to shift and claim her place as alpha, or she’ll lose it forever. But Tarron Wilde, a sarcastic and striking elf, makes her wonder if being alpha is really what she wants. The future of her entire pack relies on Willa’s choice—embrace what was written in the stars so long ago or choose to fight for what her heart desires.

Reawakened by Morgan Wylie
Like all young witch hunters in Havenwood Falls, seventeen-year-old Macy Blackstone has been spelled to control her killer instincts. When she’s reawakened too early, though, she’s overwhelmed with the new sensations and flees town, only to discover more witch hunters living nearby. They are nothing like her family, though, and she has one moon cycle to uncover their nefarious plans and return home before the town’s wards wipe her memory and she forgets her family, her home, and her one true love. And if she can’t remember them, she won’t be able to save them.

The Fall by Kristen Yard
An introverted “late-bloomer,” seventeen-year-old Serena Alverson has no interest in a social life. She’s never had a serious boyfriend and has rarely left the safety of Havenwood Falls. But she has big dreams for her future—to travel and study the great artists of the world while developing her own craft. When Mother Nature finally comes knocking, she hands Serena not only her womanhood, but also a wicked lifetime curse with the potential to destroy everything and everyone she loves.

Author Bio:
DISCOVER THE MAGIC OF HAVENWOOD FALLS!
Located in a box canyon in western Colorado, picturesque Havenwood Falls offers breathtaking views, four beautiful seasons, and the quaint charm of a small town. A couple hours’ drive from the nearest box store, and surrounded by mountains, thousands of forested acres, and crisp streams and hot springs, it provides seclusion that its supernatural residents and visitors enjoy, allowing them to be themselves—at least some of the time. Common belief is that Havenwood Falls began as a Victorian mining town, evident in its many structures of that era, but if legends are true, the history may go back much further.
The originating families of this small, unusual town want the world to believe it’s a fictional place, that it doesn’t truly exist. As you become immersed in the stories of Havenwood Falls and its people – er, characters – you will come to believe that it’s not only real, but that you want to be there. That is the beauty of master story-telling by our talented authors.
The stories to be told about this little town are endless, encompassing all areas of the paranormal and fantasy genres, including paranormal romance, urban fantasy, supernatural suspense, and supernatural mystery. This is a multi-series, multi-author shared world where each story is an original creation by one of our many authors, some best-selling and award-winning and others making their debut. Each series launches with three novellas followed by a new release every month, as well as bundles.
Because not only do the adults get to have fun in Havenwood Falls, we have a multitude of stories to share about the teens. Growing up in a town like this has its advantages – and its pitfalls. Come discover the first-love romance, teenage angst, and trials and tribulations of the students, human and supernatural, of Havenwood Falls High, our Young Adult series.
Each series is separate and each book is (usually) a standalone, so you can skip along however you like or read them all!