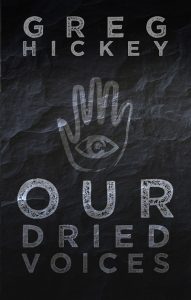 “About Our Dried Voices:

he human colony on Pearl seems perfect: meals prepared automatically, buildings cleaned by machines, no work or other obligations. No need to think, strive or create…

In 2153, cancer was cured. In 2189, AIDS. And in 2235, the last members of the human race traveled to a distant planet to begin the next chapter of humanity.

Several hundred years after their arrival, the remainder of humanity lives in a utopian colony in which every want is satisfied automatically, and there is no need for human labor, struggle or thought. But when the machines that regulate the colony begin to malfunction,the colonists are faced with a test for the first time in their existence.

With the lives of the colonists at stake, it is left to a bright young man named Samuel to repair these breakdowns and save the colony. Aided by his determined friend Penny, Samuel rises to meet each challenge. But he soon discovers a mysterious group of people behind each of these problems, and he must somehow find and defeat these saboteurs in order to rescue humanity.

“A thought-provoking type of story that lingers… after you close the book.” – Infamous Scribbler

“Everything about this book is amazing.” – Celebrity Café

Targeted Age Group: 13 and up
Written by: Greg Hickey

Author Bio:
Greg Hickey started writing his first novel the summer after he finished seventh grade. He didn’t get very far because he quickly realized he preferred playing outside with his friends.

Eight years later, he began to find a better balance between writing and life. He wrote the early drafts of his first screenplay Vita during his last two years of college. Vita went on to win an Honorable Mention award in the 2010 Los Angeles Movie Awards script competition and was named a finalist in the 2011 Sacramento International Film Festival.

After college, he spent a year in Sundsvall, Sweden and Cape Town, South Africa, playing and coaching for local baseball teams and penning his first novel, Our Dried Voices. That novel was published in 2014 and was a finalist for Foreword Reviews’ INDIES Science Fiction Book of the Year Award.

Today, he still loves sharing stories while staying busy with the other facets of his life. He is a forensic scientist by day and endurance athlete and author by nights, lunches, weekends and any other spare moments. After his post-college travels, he once again lives in his hometown of Chicago with his wife, Lindsay.