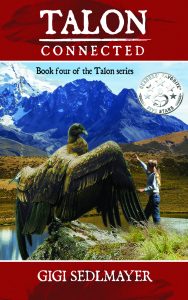 TALON, CONNECTED is the fourth story in the TALON series.
It’s for children, teens and young adults, even for younger ones. For when they have an affliction, or are handicapped, they can find out, that there is always a way out, to be happy and live with it, even when they are rejected.
NEVER TO GIVE UP
The Talon series, are such an inspiring piece of work indeed. And the stories are great, uplifting and touching, moving and exciting, and I’d unreservedly recommend them for readers of any age, young or old – they’re that good. Read one and you’ll find yourself grasping for the next, then the next. There are four in the series, you owe it to yourself to get them all.

Matica meets with the village eldest and wisest man, Elcano, who tells her ‘we are all connected to each other, Matica’s family and the Condors’.

Elcano also shares with Matica that he predicts that the Condors will be protected by all because Matica, her family, the Indians and the Condors are all connected.
These books are the most heart warming stories you will read! They are intended rot all ages. Well thought out! You will fall in love with the characters and want more as you keep going with this series! It’s so easy to get lost in each book… I know I sure did! Add these to your list to read or start reading now,you’ll fall in love with them!

And – Will the poachers kill Talon? Will the villagers catch the poachers? We’ll find the answers soon.
5 stars by READER’S FAVORITE