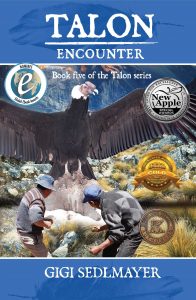 TALON, ENCOUNTER is the fifth book in the TALON series.
It’s for children of all ages, for teens, for young adults. Even parents, and they can read it to younger children.
It’s to aware, that when one has an affliction or is handicapped, that lifeis going on and can be wonderful, if they stick to something they love.In this series, Matica loves her condors and she is doing what sheloves. So can you, stick to it and do it with all your heart.
In this book, The poachers are back and want Talon. So it is war. Revenge is in the air.
The poachers are back – and they are looking for Talon! They are doing everything in their power to capture him, and if they can’t get him alive, will kill him. Determined to get him at all costs the poachers run up against the might and will of Tamo, Tima and Talon.
It is war. The poachers against the condors, Matica and the Indians – with the poachers even taking hostages to win the war.

With the help of Tamo and Tima, Talon and Matica do the impossible knowing they have to capture and stop the poachers or they will be back.

Between the poachers shooting at the condors, the crows playing their part, and Tamo being shot and injured, Matica goes above and beyond to help her beloved condors.

Action-packed from beginning to end, Talon Encounter will keep you on the edge of your seat.
NOMINEE by GLOBAL EBOOK AWARD 2017
SOLE MEDALIST WINNER with NEW APPLE BOOK AWARD for EXCELLENCE IN INDEPENDENT PUBLISHING in the Young Adult General Fiction category of our Annual book Award 2017