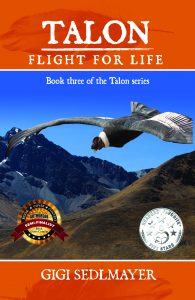 “About Talon, flight for life:

TALON, FLIGHT FOR LIFE is the third book in the TALON series
for children, teens, young adults, even for parents, and to read to younger children.

It’s to encourage children, they have to deal with affliction even with disability.

NEVER TO GIVE UP

Will they be safe as they travel? What about the dangerous animals they could encounter?Will Matica see her condors on her trip?

It’s amazing how you are drawn into the beauty and dangers of the rain forest,as Matica and her father travel to the city and villages in Peru.

You may be awed by the enchanting plants and creature inhabitants, and fearfully apprehensive of the poisonous insects and treacherous things lurking in the forest and the waters!

The discovery of Matica’s special bond with her Condors puts them all in further jeopardy, along with her father being bitten by a poisonous spider.

Journey with Matica in this third book in the TALON series. Be with her through adventures, laughter and tears. Enjoy the feeling of friendship, love and camaraderie she enjoys with her condors, Talon,Tamo and Tima.

Not to spoil the nerve-gripping tale, I recommend reading the series from book one through five. An inspirational, highly emotional and entertaining read for all ages.