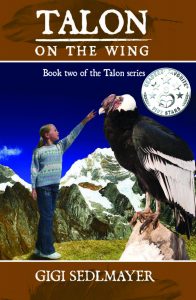 “About Talon, on the wing:

TALON, ON THE WING is the second book in the TALON series.
Aimed for children, teens and young adults, bur for parents as well, as it shows, how you can handle certain situation. Just be determent and see it through and you get what you long for.
This highly entertaining story about a girl with a disability that keeps her trapped in a shorter body of a two-year-old is a treasure to read!

Her personality will delight you.

The condors are the real characters here. It is like watching a cartoon as you read the mischief and the adventures of these birds.

What challenged Matica has dreamed ever since she first saw and befriended the condors, Tamo and Tima, in book 1 of the series, is actually happening with their offspring Talon, she and her father had rescued from poachers. And now the incredible, unbelievable, remarkable and wonderful adventures with Talon begins after the incident that happened in Matica’s hut.

This is a coming-of-age story where Matica is learning patience, forgiveness and trust.
Again, another story about friendship and freedom, about intercultural aspects in South America, and the dilemmas the main character is fazing.

During the ride there is adventure and suspense.
5 out of 5 star review by Reader’s Favorite