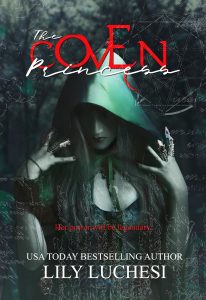 Author Bio:
Lily Luchesi is the USA Today bestselling and award-winning author of the Paranormal Detectives Series, published by Vamptasy Publishing. She also has short stories included in multiple bestselling anthologies, and a successful dark erotica retelling of Dracula.
Her Coven Series has successfully topped Amazon’s Hot New Releases list consecutively.
She is also the editor, curator and contributing author of Vamptasy Publishing’s Damsels of Distress anthology, which celebrates strong female characters in horror and paranormal fiction.
She was born in Chicago, Illinois, and now resides in Los Angeles, California. Ever since she was a toddler her mother noticed her tendency for being interested in all things “dark”. At two she became infatuated with vampires and ghosts, and that infatuation turned into a lifestyle. She is also an out member of the LGBT+ community. When she’s not writing, she’s going to rock concerts, getting tattooed, watching the CW, or reading manga. And drinking copious amounts of coffee.